The leaves have turned to brown, the temperature has dropped into single figures and you’ve suddenly realised there’s only a matter of weeks before Christmas. Somehow, we’re already in November and before the present panic sets in, let’s take a moment to reflect on all the brilliant shows that hit our doors throughout October.

If you needed any proof of how adored 5 Seconds Of Summer are, all you have to do is witness the hundreds of fans who queue for hours (and sometimes, days) for their live shows. Making their return to the UK following the release of their 80s-inspired, deliciously pop album, Youngblood, this intimate run of shows saw the four Aussie lads blossom into full blown rockstars.

Fringed jackets, sequined blazers and colourful lights were the order of the day, as their stage filled the room with hues of red and blue and the crowd screamed back every single word. Squeezing in an array of favourites from across their three albums, including the breakout smash, ‘She Looks So Perfect’, the emotional, ‘Amnesia’ and the triumphant, ‘Jet Black Heart’ – this was a set nothing short of perfect and it won’t be long before the band are setting their sights on stadiums.

There aren’t many better ways to spend an autumnal evening, then going to have your mind and soul soothed by Tom Odell’s voice. Shortly before the release of his new album, Jubilee Road, the singer took to the road to perform some of his stunning new material to his devoted fans.

From the moment he took to his beloved piano, the room was silent and in awe of the sounds that filled the venue. Each song a little more beautiful than the last, Tom worked his way through ballads from across the past five years, his voice delicate and strong, and his words, honest and meaningful. Tom Odell is undoubtedly one of Britain’s finest songwriters to date and we can’t wait to see where Jubilee Road takes him.

TOOTS AND THE MAYTALS

There ain’t no party like a reggae party, and Toots And The Maytals certainly brought one to town. The Jamaican legends put on a faultless performance, bringing some much needed warmth and sunshine to O2 Academy Bristol one a cold October day.

Performing some of reggae’s most-loved classics, including ‘Pressure Drop’, ‘Monkey Man’ and ’54-46’, the group had everyone bopping, grooving and losing themselves in the rhythm. With a charismatic frontman in Toots Hibbert, it’s hard not to laugh and feel the joy of the music spreading within you when he performs. To make it just that little bit extra special, they even delivered a heart-warming tribute to the great Bob Marley – a perfect addition to what was a stupendous night. 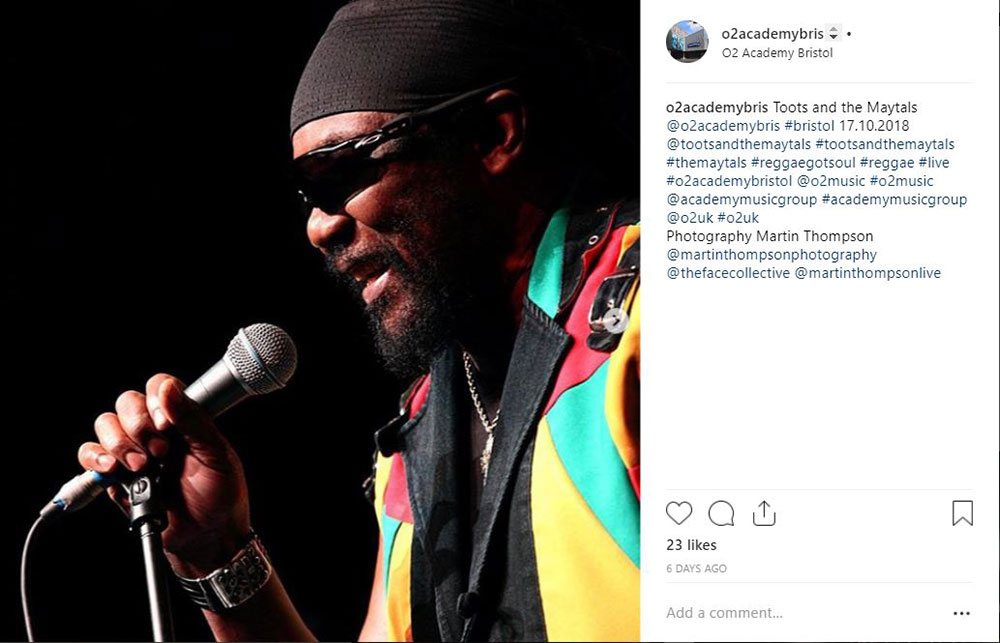 Idles have been the band on everyone’s lips the past few months and if their headline show at O2 Academy Oxford is anything to go by, things are only going to get more chaotic for the five-piece.

The scrappy indie-punks practically tour the roof down as they performed much of their latest album, Joy As An Act Of Resistance, a whirlwind of social anecdotes and screeching guitars. Having become somewhat a voice for a millennial generation, you can expect to have discussions about everything from Brexit to self-care at an Idles show, but you’ll be shouting their words from the rooftops as you do so. A raucous and disgustingly sweaty (even for mid-October) affair, there wasn’t a single person who didn’t have their jaw wide open in awe at the performance Idles gave, so do yourselves a favour and make sure you catch these bombarding Bristolians on their road to world domination. 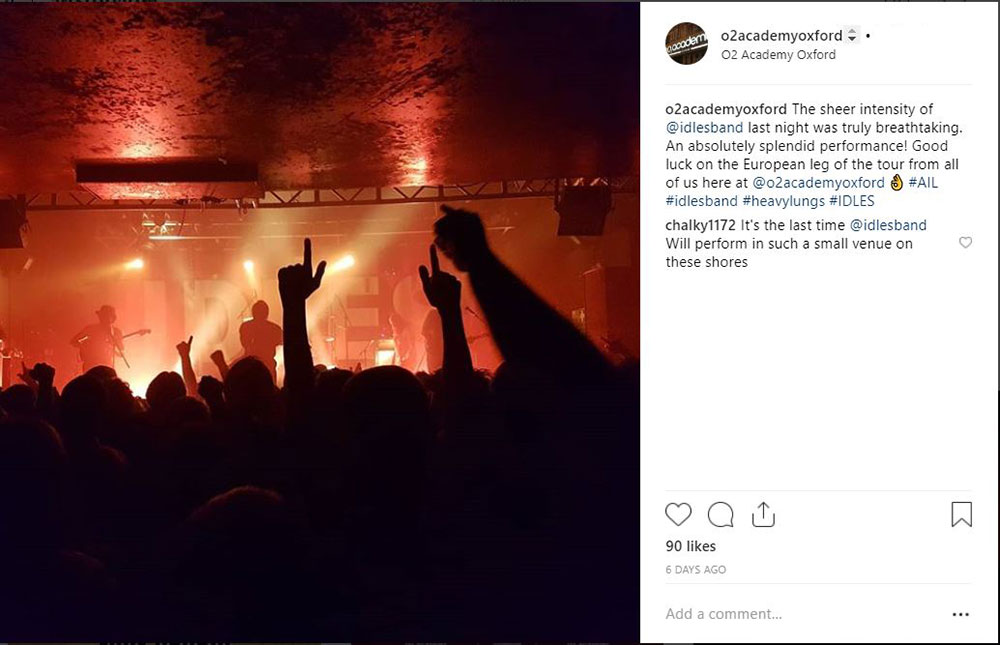 It’s safe to say everyone was left stunned when Jorja Smith visited town for her biggest headline shows to date recently. Rising to fame this year with her sultry R&B sound, seeing it all come together live was a truly magical experience.

Laidback and effortless, her voice alone was enough to make the show a highlight of the month, but when combined with her incredibly talented collective of musicians and some special guests, which included - (deep breath) - Maverick Sabre, Ezra Collective, Little Simz, Dizzee Rascal, Stormzy and Loyle Carner it was hands down one of the best shows we’ve seen all year.

Superorganism are one of the most creative and charismatic groups to come out of 2018 and their quirky pop sound has been delighting people’s ears throughout the summer months. Though the warmth of the sun is now a distant memory, the eight-piece collective provided plenty of shimmering melodies and bountiful bops to make it feel like it had never disappeared.

Bringing their debut, self-titled album to life, the band - dressed in sparkling capes and other wardrobe staples – grooved their way through standout favourites, ‘Everybody Wants To Be Famous’, ‘Night Time’ and ‘Something For Your M.I.N.D’, as well giving the audience a lesson in dance. Overall, it was an incredibly fun evening that reminded us all to let loose and enjoy moments like this in our lives. Special mention to support act, Chai as well, who did an alarmingly good performance of ‘Dancing Queen’, but sung in Japanese!

Canadian electronic DJ, Richie Hawtin came to O2 Academy Glasgow for an exclusive Scottish date this month and what a treat it was. Used to dominating festival stages and clubs across the world, Richie brought his full-scale 'Close' show to the intimate venue stage, offering a whole new experience to techno fans in the city and beyond, who could revel in the electronic catharsis and still get up for work early the next day.

With an epic setup and intense light display, the whole performance was a sensory overload, taking the crowd down different journeys of electronic music, with twists and turns along the way.

With an epic setup and intense light display, the whole performance was a sensory overload, taking the crowd down different journeys of electronic music, with twists and turns along the way. The best bit being that, due to the choice of venue > club, it meant those who adore Richie’s work could witness his mesmerising show and still get up for work early the next day.

If Tom Grennan had a spirit animal it would be a bee, because he is absolutely buzzing right now. High on life, the cheeky Befordshire chap took in a whopping nine of our venues across the nation and despite the lack of sleep, his performances were a bundle of energy delivered by a man clearly having the best time of his life.

O2 Academy Brixton saw him crowdsurf, O2 Academy Liverpool had the Hollyoaks cast in attendance and O2 Academy Sheffield had some of the messiest moshpits they’d ever seen. Each and every performance was a vibrant, anthemic and downright sweaty affair, providing all the evidence you need that he’s a bona fide festival headliner in the making.

Hard rock band, Shinedown brought a whole lot of arena-sized noise to O2 Academy Newcastle as part of their headline UK tour and boy was it good.

New album, Attention Attention was the main course of the day, with ‘Get Up’ and ‘Devil’ sounding as epic live as they do on record and the rest of the set delivering riffs that rattled the venue walls and lasers that lit up every corner of the room. Throwing in an acoustic version of ‘45’ and a cover of Lynyrd Skynyrd’s ‘Simple Man’ – this was a set perfected to a T and judging by the roars heard from the crowd, it went down pretty well with everyone.

Despite not even having a debut album to his name, Irish songwriter, Dermot Kennedy has had the most astonishing rise over the past year. A husky voice, folk roots and hip hop influences all come together to create the most textured and emotional songs, that have toyed with people’s heartstrings with each release.

Having spent most of 2018 on the road, Dermot squeezed in one more headline UK run before the year is out and one by one, the shows quickly sold out. With a full band behind him now, his music has transformed into a full bodied affair and one look around the O2 Academy Liverpool room and you could see fans lost in sound. ‘Young And Free’, ‘Glory’ and latest offering, ‘Power Over Me’ were the clear winners of the night, the crowd singing along at the top of their lungs as we all witnessed our generation’s next greatest songwriter stand before us.

Experimental, multi-genre artist, Four Tet came to O2 Academy Brixton for not one, not two, not even three, but FOUR live shows – two of which being his legendary all-night performances.

Whereas most acts tend to perform on, y’know, the stage, Four Tet decided to do things a little differently. Placing his platform in the middle of the floor, the audience were instead gathered in a circle around him, absorbing the elements of each sound that burst out from the speakers. Working from his eclectic catalogue of albums, singles and remixes, it was a true celebration of an artist not afraid to break and bend boundaries.

The 90s and 00s were the golden eras for indie music and many of the acts who rose to fame then are still dominating stages worldwide today. So, we took a look at the guitar bands that made it big and which of them will be playing live, real soon. Check out our guide here and listen to our throwback playlist below.

There aren’t many things better than discovering a new band or artist whose music you instantly connect with. Whether they’re touring the nation making their name or supporting big acts globally, we’re here to put a spotlight on the musically-gifted people with a bright future ahead of them. This month, we introduced the young, fearless popstar, Sody.